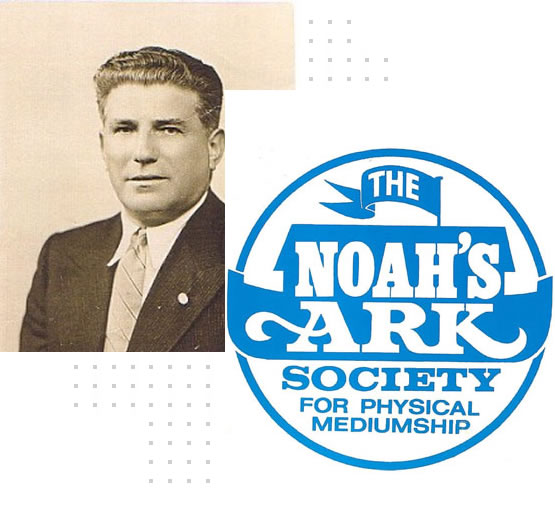 A little about The Noah's Ark Society

What was the purpose of the society?

In March 1989, an advert for sitters in a physical circle at Ilkeston, Derbyshire appeared in the ‘Psychic News’. It was for the trance medium of the circle Stuart Hellen supported by his wife Valarie.  They had been asked by their Spirit Team to start a physical circle, running just once per month on the Saturday closest to the new moon.

In April 1989, the first proper physical phenomena sitting took place. Several raps occurred, together with psychic breezes, and ‘whistling’ was clearly heard over the singing of the group.

Later in the year the circle went to visit Leslie Flint. Through his Independent Voice mediumship, the group received confirmation of the work they were doing to develop physical mediumship, and much evidence concerning the circle.  Leslie Flint had been mentored by Noah Zerdin in the earlier days of his development for Direct Voice.

Stuart Hellen’s mediumistic development continued and early in 1990 – his Spirit Team requested that Stuart’s chair be moved into a cabinet. During this first ‘cabinet’ sitting, the circle were taken unawares when the initial attempt at Independent Voice took place. This phenomenon continued to develop during the further sittings in 1990.  The well-known Victorian Novelist and Spiritualist Florence Marryat became a regular communicator in the circle.

In May 1990, it was on the anniversary of the inaugural meeting of the ‘Link of Home Circles’ (held in 1931 and attended by its founder – Mr Noah Zerdin) where a spirit personality communicated with in the Independent Direct Voice. This was Noah Zerdin himself, he specifically asked the circle to “Start a Society which would educate the public about physical mediumship – ensuring its safe development, demonstration and practice – as well as generally promoting physical mediumship and its phenomena to the public”.

Noah Zerdin, a Spiritualist known for his having founded The Link , a network of Spiritualists groups built around small groups that sat for spirit contact in their homes.

The circle decided upon the name ‘Noah’s Ark Society’ for the following reasons:

The very first member – number 001 – was Stewart Alexander. He agreed to join the committee, and to be the ‘Archive Officer’, although not admitting he was a physical medium himself.

The first committee consisted of just the members of the Ilkeston Circle, together with Stewart Alexander. Robin Foy was nominated ‘General Secretary’.  It was agreed that the first ‘President’ would be the medium – Stuart Hellen. The first ‘Treasurer’ was Denise Lacey, another Ilkeston sitter. Apart from Stewart as ‘Archive Officer’, the rest of the committee was made up by: Stuart’s wife Valarie Hellen; Michelle Hackett; Mark Stanley and Jacquie Turner.

Noah’s Ark Society continued to grow at a rapid rate.  At a general meeting in January 1991, veteran medium and researcher Alan Crossley was elected as the new ‘President’, and Robin Foy became ‘Chairman’.

In late 1989, another advert had appeared in the ‘Psychic News’: for sitters to attend another physical circle – this time in Hove, near Brighton. This group was run by John Austin – a veteran Spiritualist – and his wife Gerry. They too knew Leslie Flint who lived only a few streets away. This was a weekly circle and after sitting for a number of months, John and Gerry decided that they needed a new carpet for the lounge in which their circle sittings took place.

The manager of a local carpet warehouse called to measure up the room, and instinctively made the comment that he knew what that room was used for. ‘Séances!!’ There was no way he could have known this by normal means, so John and Gerry chatted to him about their interest. The result was that the young man – Colin Fry – was asked to join the circle. He agreed, and history was born!! It was not long before Colin’s physical mediumship took off, and he started to go into deep trance. In terms of physical phenomena, his development was quite rapid. Within months, advanced examples of physical phenomena were taking place and – by mid 1990 – it was apparent that he was going to be an excellent physical medium. On one occasion a coin was suddenly apported into the centre of the circle from the medium’s solar plexus. Later, when levitation of the medium became commonplace, he was once levitated – complete with chair – through a wall into the next room! Colin was later invited to become Vice-President.